[Excerpt below is from Chapter 3 of War and Gender]

The evidence on the entire question of testosterone and aggression in humans is undermined by problems of measurement, reverse causality, and poor experimental design. The main conclusion is that testosterone seems to influence intensity of aggression in some contexts, but these are not well understood and are not dramatic in magnitude.

The reverse direction of causality – from social aggression to testosterone levels – seems stronger. Men’s fluctuating short-term testosterone levels respond to competitive situations, such as a tennis or wrestling match, a chess game, or a competitive task in a psychology laboratory. Levels rise in preparation for the competition, and then go up afterwards in winners, and down in losers. This effect does not depend on direct aggression. It applies to any changes in an individual’s perceived status in a social hierarchy. Winning or losing a physical fight often has that effect, but so do other competitions. The testosterone high of competitive victory has been measured in males participating in a ceremony to receive their MD degrees, and even in sports fans when their team wins. (One study of US males in various professions found highest testosterone levels among trial lawyers and lowest levels among ministers – i.e., among the most, and least, competitive professions.)49

The effect on testosterone levels depends on subjective judgments about triumph or defeat, and is strongest when a victory is decisive and results from an individual’s own efforts. For example, testosterone changes after professional basketball games correlated not with the game’s outcome but the player’s assessment of his own contribution to a win or loss and his attribution of the outcome to internal or external causes. Similarly, in judo competitors, post-match testosterone significantly correlated not with the outcome but with the individual’s satisfaction with that outcome. Among eight men participating in a New York chess tournament over eight weeks, testosterone levels rose about 10 percent on average in winners of games where the chess ratings of the players were close (the players expected to have to fight hard to win). However, testosterone actually decreased after a win where the ratings showed ahead of time that winning would be easy (down about 10 percent, as with losers). In 17 young male first-offenders in a shock-incarceration (“boot camp”) program, testosterone levels dropped dramatically in the first month, but less so in six men who started out with a bad attitude and may have refused to feel defeated. Thus, men’s testosterone response to competition depends on “cognitive and emotional aspects rather than…objective… outcome or physical exertion.”50

Since winning social conflicts increases testosterone levels, winners are presumably more sexually motivated than losers. In some species, high-status males who win conflicts (and, sometimes, control territory) do most of the breeding. This may be the original evolutionary reason for testosterone to rise in winners – a higher status in the social hierarchy implying more sexual opportunities. The lingering effects on our physiology could help explain both Henry Kissinger’s claim that “power is the great aphrodisiac,” and the expansive sexual proclivities of many male political leaders. However, the status hierarchy as regu-lator of sexual access (rather than just access to food and resources) does not seem to apply well to humans and closely related species (see pp. 204–5). Nonetheless, the competition-testosterone effect may dampen or augment soldiers’ sexuality, since their testosterone levels must move en masse – downward during both basic training and extended combat (especially for a losing army), but upward before battle and (especially) after a victory.53

Biochemical pathways The biochemistry by which individual biology carries out these testosterone effects is fairly well understood. In short, subjective judgments about a person’s social rank drive a frontal lobe–amygdala–hypothalamus–pituitary–gonad axis, modulating testosterone production and thus regulating the expression of certain genes.

Direct connections link part of the brain’s frontal lobes – very large in humans, and central to complex social behaviors including aggression – to the amygdala (which also receives sensory information from the cortex). Nerve bundles in turn link the amygdala to the hypothalamus, generating hormones appropriate to motivated behaviors. The electrical activity of the amygdala “increases during social aggression in monkeys.” Damage to the amygdala reduces aggressive behavior in animals and makes monkeys lose social rank. Similarly, damage to the hypothalamus reduces both aggressive and sexual behaviors in male rats, whereas implanting testosterone there restores these behaviors in castrated males.55

Thus, sex hormones play an important role in translating social contexts and events – via the frontal lobes, amygdala, hypothalamus, and gonads – into social behaviors such as intermale aggression. The “hypothalamic–pituitary–gonadal axis” described by biologists – illustrated on the right side of Figure 3.8 – is embedded in a feedback loop mediated by social relationships on the left side of the figure. Higher testosterone makes individual males stronger and more aggressive towards those already targeted for aggression (those at lower levels in a status hierarchy), though testosterone levels do not directly affect the status hierarchy itself, as we have seen. The right-hand feedback loop, internal to the body, is a self-regulating (negative feedback) loop typical of biological organisms. The left-hand loop, however, tends to be a positive loop (though strongly influenced by external forces) because males who rise in status by winning fights have higher testosterone levels, which make them both stronger and more aggressive towards underlings, in turn making them win fights and boost testosterone.56 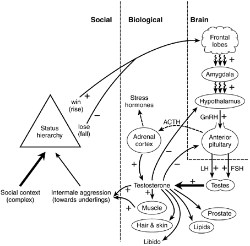 Testosterone is, however, only a minor influence on changes in status hierarchy, as compared with “social context.” This context includes the formation and shifting membership of coalitions (especially important near the top of the hierarchy where an “alpha male” often needs allies to stay in power), individual deaths and comings of age, individual intelligence and learning, scarcity or abundance of resources, and other complex elements that affect hierarchical social relationships.