[Excerpt below is from Chapter 5 of War and Gender]

Longer-term effects Beyond short-term combat fatigue, many soldiers suffer serious and long-lasting psychological damage as a result of combat experience – frequently enough to knock them out of fighting as surely as if they were physically wounded. In World War II, the US Army had to send home nearly 400,000 soldiers for psychiatric problems. In 1973, almost one-third of Israeli and Egyptian casualties were psychiatric. By one estimate, “the number of psychiatric casualties in every war in this century … have exceeded the number of soldiers killed by hostile fire by 100 percent” (although still less than the number of non-lethal physical casualties). This toll seriously degrades armies’ fighting abilities.22

These effects have been called, in various wars, “shell shock,” “combat neuroses,” or “post-traumatic stress disorder” (PTSD) – controversial designations. Symptoms of PTSD have been identified in the accounts of veterans from the US Civil War. Manifestations of combat trauma have been “remarkably constant” through history. The intensified destruction of twentieth-century wars may make combat trauma more pervasive than ever, especially since World War II.23

During World War I, British forces lost 80,000 soldiers – one-seventh of all disability discharges – to shell shock. Military leaders worried that if shell shock became an honorable route to escape from the front, too many soldiers would follow it. A British report after the war thus recommended that pensions be denied to victims of shell shock because no such thing exists. Rather, about 90 percent of such cases were simply total exhaustion, best treated quickly, briefly, and near the front. Only about 10 percent were considered true neuroses – although the outward manifestations looked somewhat similar. In World War II, countries that retained strict diagnostic criteria had a similar psychiatric casualty rate as in World War I (just under 1 percent of all casualties), whereas the US rate quadrupled when it adopted more lenient criteria.24

Since the Vietnam War, PTSD has been recognized in the Diagnostic and Statistical Manual (DSM) of psychotherapy. (Critics say that PTSD “is not timeless, nor does it possess an intrinsic unity,” but is a “historical product” invented and made real in specific times and places.) The DSM-IV defines PTSD as “the development of characteristic symptoms” – persistent reexperiencing, avoidance of associated stimuli, and others – “following exposure to an extreme traumatic stressor involving direct personal experience of … actual or threatened death or serious injury, or other threat to one’s physical integrity.” The common denomi- nator of traumatic experiences is a feeling of “intense fear, helplessness, loss of control, and threat of annihilation.” Experiences in which a survivor actively participated in killing or committing atrocities are especially traumatic, particularly when such participation cannot be “rationalized in terms of some higher value or meaning.”25

PTSD results in three main categories of symptoms. “Hyperarousal” reflects a constant expectation of danger. “Intrusion” refers to the lingering imprint of trauma on mental processes. Traumatic memories are separated off from other life memories, and are stored not in verbal and contextual form but as “vivid sensations and images” sometimes re-enacted unconsciously in behaviors. “Constriction” refers to the numbing of feelings, a natural response to pain. For example, a World War II veteran recalls seeing what combat soldiers call the thousand-yard stare – “the wide, hollow eyes of a man who no longer cares. I wasn’t to that state yet, but the numbness was total. I felt almost as if I hadn’t actually been in a battle” (see Figure 5.2).26 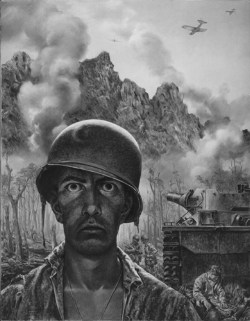 PTSD typically leads to emotional numbing (and hence to relationship problems), recurrent nightmares, substance abuse (traditionally, alcoholism), and, most frighteningly, delusional outbursts of violence. PTSD usually manifests itself in more subtle symptoms, however. The most immediate psychological symptoms in combat veterans are conditioned reflexes from combat, notably the tendency to “hit the dirt” on hearing a loud noise like a car backfiring. These habits are superficial though, and wear off quickly. The nightmares are long-lasting: a combat veteran sits up in bed, in a deep sleep, shouting “Kill him! Kill him!” or “Get down!” Combat veterans with PTSD may direct their aggression at the very women they depend on for care and connection: “On several occasions, he threw his wife against the wall, mistaking her for an enemy soldier.”27

Not surprisingly, given the role of stress in weakening the immune system (see pp. 157–58), a recent study of 1,400 US Vietnam veterans showed that those with PTSD – nearly a quarter of the total – were twice as likely to have physical illnesses that included a “broad spectrum of human diseases” such as heart disease. Recent research on psychological trauma victims (from combat and other sources) shows that those with PTSD have a smaller (8 percent in one study) hippocampus, which is associated with memory and learning, in their brains. They scored 40 percent lower on a test of verbal memory than people of the same age and educational background.28

At the heart of PTSD is isolation – a feeling of disconnection from peacetime family and friends. “In situations of terror, people spontaneously seek their first source of comfort and protection. Wounded soldiers and raped women cry for their mothers, or for God. When this cry is not answered, the sense of basic trust is shattered. Traumatized people feel utterly abandoned, utterly alone, cast out of the divine systems of care and protection that sustain life. Thereafter a sense of alienation, of disconnection, pervades every relationship.”29

Traumatized individuals often cannot share traumatic experiences because even if others want to hear horror stories they cannot truly understand them without having been there. “Traumatic events … breach the attachments of family, friendship, love, and community.” As the protagonist of one Vietnam novel hears from her veteran uncle, “women weren’t over there … So they can’t really understand.” Furthermore, going home from the front breaks a soldier’s most important “lifeline” – the bonding with others in a small group. The same nightmare – becoming isolated from one’s comrades in battle – comes to both American combat veterans and fierce warriors from two simple societies in New Guinea.30

Trauma not gendered The psychological trauma that results from participation in combat is not innately gendered. Women are as terrified as men during fighting, and as prone to PTSD afterwards. A study of PTSD in US Vietnam veterans found similar patterns for female veterans (mostly nurses) as for males, relative to the level of exposure to war-zone stress (such as exposure to dead and wounded soldiers). Overall, 53 percent of male Vietnam veterans and 48 percent of female ones “have experienced clinically significant stress-reaction symptoms” sometime during their lifetime. Nearly 10 percent of female US military personnel who served in Vietnam were diagnosed with PTSD some 14 to 22 years after their Vietnam service. For those women exposed to high war-zone stress, the current PTSD rate may be as high as 20 percent. For both genders, PTSD rates were higher for veterans who served in Vietnam than those serving elsewhere, and higher still for those in war-zone locations. Consistent with the importance of isolation in exacerbating PTSD, married women have substantially lower rates of PTSD than unmarried ones.31

Recently, several scholars have linked PTSD in combat veterans with similar symptoms in women victims of rape or incest. PTSD, in this view, is not specific to men or to combat, but merely one manifestation of a process of trauma and recovery that applies to both men and women. One study of 26 battered US women attending domestic violence clinics found almost half to exhibit PTSD symptoms. Group psychotherapy may help counteract the isolation of PTSD, and the “shattered self” may be reintegrated in the “intersubjective” space of the individual patient– therapist relationship. The restoration of connection with other people is central to treatment of PTSD because only by telling trauma stories can survivors overcome an individual and social urge to forget and banish unspeakable memories. “The conflict between the will to deny horrible events and the will to proclaim them aloud is the central dialectic of psychological trauma” for both rape and combat survivors. The stages of recovery also are similar: “establishing safety, reconstructing the trauma story, and restoring the connection between survivors and their community.”32

Some scholars emphasize killing itself, not subsequent isolation and stigmatization, as the source of PTSD. Other scholars argue that combat trauma is more likely to cause PTSD than are “civilian” traumas including rape, but not because of participation in killing. (Actually, medical personnel in combat theaters are “particularly likely to develop stress-related disorders.”) Rather, PTSD results from the soldier’s isolation from home and community, the multiple and prolonged traumas, and the uncertainty about the immediate future, in this view.33